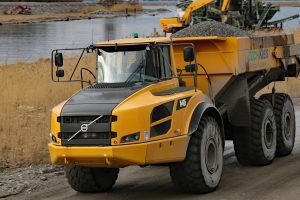 Own a dump truck business or a sand and gravel business that uses dump trucks? If so then for the best options in Commercial Dump Truck Insurance in Westland Mi call Pathway Insurance.

We once again continue our series on exclusions of coverage, which are specific situations pointed out in the language of an insurance policy for which coverage would not be approved by the insurance company.

And as we always say, the best advice we can give when it comes to exclusions of coverage is to read your policy very carefully! It is the most effective way to truly understand what is and is not covered on your Michigan Dump Truck Insurance policy.

Let’s get back to our claims scenario illustrating why knowing your policy’s exclusions of coverage can help you in the future.

You may recall that William is a dump truck operator for Humpty Dumpers Inc. His nickname is Lead Foot Willy, and his boss told him that if he gets pulled over for speeding one more time then he’s going to be fired.

Rather than change his driving habits, however, Lead Foot Willy decides to take a different tactic. He convinces his cousin to let him borrow a couple radar detectors to see if they really can alert him to the presence of police in the area so he can avoid getting pulled over. His cousin agrees, but only if Willy promises to reimburse him in full if they get damaged or stolen.

Willy knows Humpty Dumpers Inc. has insurance for all of its dump trucks, so he agrees.

Lead Foot Willy installs the radar detectors in the cabin of his dump truck one Tuesday afternoon and goes about his business as usual. Three days later, while transporting a load of gravel down a rural road at 20 over the speed limit, one of Willy’s detectors goes off. Willy slows back down to the legal limit for a while. Sure enough, he spots a police car hiding behind a thick patch of bushes just off the side of the road.

Smirking to himself, Willy waits until he’s out of sight of the police cruiser and then guns it. Within seconds he’s going 20, 30, 40 miles per hour over the speed limit. Just then, another police car whizzes by in the opposite lane. Willy hears sirens begin to sound. The sudden appearance of another police car startles Willy so much that he jerks his steering wheel just enough to cause him to lose control. The dump truck scrapes up against a few mail boxes and a road sign, leaving major gouges in the truck’s side. Willy slams on his brakes. The radar detectors sitting on his passenger seat fly forward and crash into the dashboard, breaking into several pieces.

Willy holds his head in his hands. He knows he’s about to lose his job.

Come back next week for part 3.

Insurance is complicated. At Pathway we can help you sort through those complexities and get to the coverage you need.

Call us today at 800-998-0662 to speak with our licensed agents or click Dump Truck Insurance Westland Mi for quotes seven days a week.

Sorry, the comment form is closed at this time.